This December 3rd, 2011 SEMclix was proud to sponsor the Alderwood Boys and Girls Club Lego Robotics team, the Radical Red Robots. The Radical Red Robots participated in the First Lego League 2011 regional competition in Lynnwood, WA. The competition comprised of 29 teams with team members between the ages of 9 and 14. This is a competition held every year in the greater Seattle area.

The First Lego League is a global organization which hosts Lego Robotics competitions all over the world. These competitions are designed to teach children about science, team work and fair play. Tournaments showcase a team’s ability to problem solve selected topics and this year’s theme, Food Factor, was based on food contamination. Each team chose a type of food to work with and had to find a solution to reduce it’s contamination.

Contestants are judged in several different areas, one being the proposal for their innovative solution by illustrating how it will work. In previous tournaments, some of the ideas have been so revolutionary that they were put to use in the real world. Another judging factor is how well a team can perform different missions using a Lego Mindstorm Robot. Teams construct several attachments that are used to aid their robot in completing set tasks and manuevering through obstacles. 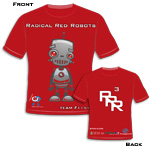 The Radical Red Robots have been preparing for the competition since September. The contaminated food chosen by the team was crabs effected by oil spills. Their strategy was to develop a good bacteria which speeds up the molting process of crabs. The aptly titled Crabteria would be used in coastal areas susceptible to oil spills. Crabteria allows crab larvae to quickly molt out hazardous oil droplets. By applying the Crabteria in the early stages of a crab’s life, we should be able to significantly reduce the amount of oil contamination by the time it reaches adulthood.

With this unique idea, along with their handling of the Lego Mindstorm Robot, the Radical Red Robots were able to finish the tournament placed in the top ten. This having been there first competition, the team was very happy with this outcome and they are looking forward to next year. We would like to say congratulations and are proud of the Radical Red Robots for finishing 7th and receiving a trophy for best presentation with Crabteria. One of the team’s coaches, Sara-Beth, was also awarded with the Youngest Inspirational Coach award which is given to coaches under the age of 21.

We invite you to support the First Lego League in your local area and especially the Radical Red Robots. Get Radical!